website excellent biogas in progress. Look around and visit us again soon.

Theo Bijman, the owner of Excellent Biogas, started working in the biogas industry in 1999. Almost twenty years ago, the development of the biogas industry was just starting and he helped  with the first construction of a small digester with an 18 kW Ford CHP at a farm in Denekamp, Twente.

As a student at Wageningen University already back in the 1980's he touched the subject. In these early days, biogas did not survive. After the oil crisis, the price of oil dropped again, natural gas was cheap and electricity was cheap. Biogas engines broke down frequently, H2S in the biogas corroded the internals of the engines, concrete tanks were not gastight, little  support at that time for the production of sustainable, green energy.

Thecogas Biogastechniek BV was founded and constructed (until 2009 ) in collaboration with German company PlanET Biogastechnik Gmbh a large number of biogas plants in the Netherlands. Between 2009 and 2011 Thecogas extended its activities to Africa and India.

In 2011 the activities and the name Thecogas was sold to Nijhuis Water Technology. The company renamed itself to Excellent Biogas BV.

Since then Theo Bijman supports biogas projects with feasability studies, repowering and the introduction of new technologies and engineering, design and supervision. 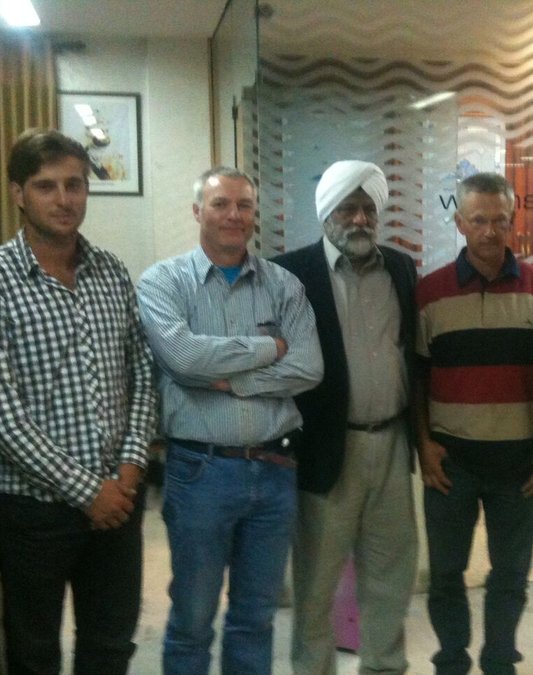 Theo Bijman with the late Dilvinder Singh Narang from RDM Care, and Sietze vd Velde (left) and Wim Bruil (right) during the construction of the Jabalpur biogas plant.

More than 20 years experience in the biogas industry.

Built a great number of biogas plants in The Netherlands, Africa, India and Asia.

What can we do

We can support you with engineering and design of your biogas plant.